Endowments led by women outperform those led by men

Shortfall in Women CIOs at Endowments is Mysterious

5-7-19 Institutional Allocator: Shortfall in Women CIOs at Endowments is Mysterious 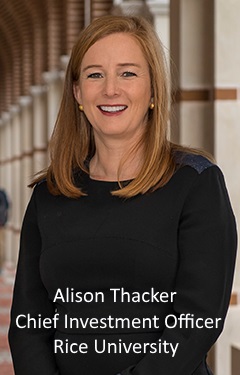 In our last newsletter we looked at the number of women CIOs at big endowments*.  Among 109 North American endowments over $1 billion we identified 20 (including one female director of investments and one CFO who liaises with their OCIO providers).

That’s just eighteen percent – less than one out of five.

For this issue we also took a look at the mid-sized schools (in the $500 million-to $1 billion bracket), to see if the situation is any better.

Unfortunately, that’s a no.  We found 10 females among 85 schools.  That’s just 12 percent – a significantly lower representation that among the bigger schools.

We’ve inserted a chart below with the CIOs ranked by AUM.

Twelve percent in this group is not quite as bad as it sounds.  That’s because mid-size endowments are less likely to have dedicated in-house investment staff – either men or women.

Many prefer to outsource, or to use a committee-and-consultant model without an internal investment office.

But it’s still not a great number.

Although we haven’t done an exact count, we should note that females are well represented among professional slots at the major OCIO firms and consultants.  These are good jobs, and often a gateway to CIO jobs (although they usually don’t pay as well).

This may somewhat mitigate the overall situation for women jobseekers.

That’s the static picture, but the trend is even more important.

Is that gap worsening, or about the same over recent years?

Unfortunately, it seems to be widening.

Looking at recent turnover, 9 departing female CIOs have been replaced by men; while only 3 were replaced by other women.

Just one departing male was succeeded by a female.

These turnovers are detailed in the next chart.